Where is Planet Nine?

The orbit of Planet Nine

While Planet 9 has not yet been seen, its existence has been revealed by the gravitational effects that it has on the most distant objects known in the solar system. We have used a combination of computer simulations and observations of distant objects to make a preliminary estimate of the current orbit of Planet Nine. This analysis is all detailed in a new scientific paper that we are preparing, but we would like to share the basic results so that everyone will know where and how to try to track down Planet Nine in the sky.  As we are still finalizing the results, don't be surprised if things change a little in the final scientific publication; do be surprised if they change a lot, though.

Here is what we have inferred to date:
From those inferences, we can estimate the orbital path of Planet Nine, the distance away, how bright is is, and how fast it is moving in the sky. We can summarize our findings in this simple plot, which we refer to as the treasure map: 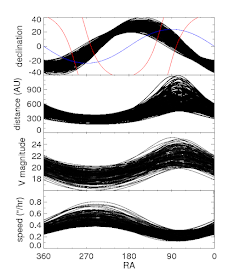 The top plot shows our estimated orbital path. The red lines show the approximate outlines of the Milky Way galaxy, which we include in the plot as a warning: it is a lot harder to find objects when the bright Milky Way galaxy is in their background, as we witnessed with all of the difficulties that the New Horizons team had in finding Kuiper belt objects to go to after the Pluto flyby. If Planet Nine happens to be at one of these two places in its orbit it will, unfortunately, be much harder to find. The blue line shows the ecliptic -- the path of the planets across the sky -- which shows you than Planet Nine is tilted by about 30 degrees compared to the other planets of our solar system. The ~20 degree width of the estimated path of Planet Nine is largely due to the uncertainties in inclination and argument of perihelion.

Next is shown the distance to Planet Nine. In this plot you can see the positions in the sky where Planet Nine is at its closest and most distant from the sun. The largest uncertainty is in is furthest distance, which could be as large as ~1200 AU.

Below is an estimate of the magnitude (brightness; larger numbers mean fainter; sorry; blame the ancient Greeks), which is a function of both the distance and the size.

Finally we show the speed that Planet Nine would be moving across the sky at opposition. The speed is almost entirely due to parallax, with a tiny bit of orbital motion to counter the parallactic motion. The units are arcseconds per hour, which is the until that most of us who observe distant objects in the solar system think in. A typical object in the Kuiper belt, for example, moves at something like 3 arcsecond/per. Eris, which is the most distant confirmed object still known in the solar system, moves at a speed of 1.5 arcseconds per hour, which is so slow that it was missed the first time around. Most surveys of the outer solar system would not be able to find Planet Nine, even if it were quite bright, as they would just think it is a stationary star. A few exceptions are noted below.

Observational limits on the presence of Planet Nine

At its closest approach to the sun, Planet Nine is not particularly faint. Many high end back yard telescopes would have the capability of seeing it. More importantly, many rigorous astronomical surveys would likely already have detected. We think, therefore, that Planet Nine is not at its closest (with the usual caveat that the Milky Way galaxy makes things difficult). The strongest observational limits come, we think, from the following surveys (if you know of another survey that covers the right region of sky to the right cadence, please let us know!):

Two years ago, using data from the WISE survey (a thermal infrared wide field all sky survey in space) Kevin Luhman showed that there were no Jupiter or Saturn mass Planet Xs out to a vast distance. Sadly, the survey is not very sensitive to ~Neptune sized objects, which could barely be seen to Planet Nine's ~200 AU closest approach. Luhman has redone the survey using the more sensitive bands of the WISE data (but which covers a very limited part of the sky), and reports that there is still nothing there. He is still trying to understand what the limits are for a ~10 earth mass object, but we have hope that WISE would have seen Planet Nine in the section near Planet Nine's perihelion where it crosses the Milky Way. Stay tuned.

A year ago I combined data from he Catalina Sky Surveys, which look for near earth asteroids, to turn it into a powerful search for slowly moving objects. This survey was one of the first (since Tombaugh and Kowal!) to cover a large part of the sky and be sensitive to extremely slowly moving objects (corresponding to distances out to ~10,000 AU). The survey recovered every single one of the bright known Kuiper belt objects (except for those in the plane of the Milky Way galaxy; again), but found no new ones. We estimated 100% efficiency to a magnitude of ~19.1 in the north and ~18.6 in the south. Even this relatively shallow survey eliminates much of Planet Nine phase space.

A week ago I took the publicly available Pan STARRS transient survey and ran it through the same analysis as I did for the Catalina Sky Survey. I have yet to understand the depth of the survey completely, but it looks like it goes to something like a magnitude of ~21.5. It covers all but the southernmost parts of Planet Nine's orbit. Except for the galactic plane. Argh. But Planet Nine is nowhere to be seen.

At the DPS meeting this year, Holman et al. presented a more complete analysis of the complete PS1 data, including one sensitive to very slowly moving objects, and found no Planet Nine (or anything else distant) to a magnitude of approximately 22.5 (Matt is still working on precise numbers).

So where can Planet Nine be?

Putting it all together, we have a crude picture that looks like this of where we can rule out Planet Nine (sorry for the ugliness; today got busy...):

The Catalina, PanSTARRS transient & moving object surveys do a great job of ruling out much of the sky. They generally miss the galactic plane, but that is mostly filled in by WISE, at least at closest approach. Though we can't be 100% sure yet.

The biggest unexplored territory is where, statistically, it is most likely to be: near aphelion. Sadly, aphelion is also very close to the Milky Way galaxy. Ugh.

So where is it? Probably distant. 500 AU+. Probably fainter than 22nd magnitude. Very possibly in the middle of the Milky Way galaxy.