I finished the last post by stating the obvious: the Planet Nine hypothesis - as imagined by us - is NOT the first (or even the latest) proposal of a trans-Neptunian planet. So what distinguishes all these hypotheses? Are all putative trans-Neptunian planets the same Planet? Clearly not. Put simply, each theory is characterized by 1) the anomalous data it seeks to explain, and 2) the dynamics through which the putative planet explains the data. One of the key goals of the new paper was to place P9 hypothesis within this framework by delineating a series of purely analytical models, as well as a suite of large-scale numerical simulations. As a result, the discussion below will inevitably touch on some technical points. For those of you only interested in the final answer, however, I will take a shortcut and summarize our conclusions: 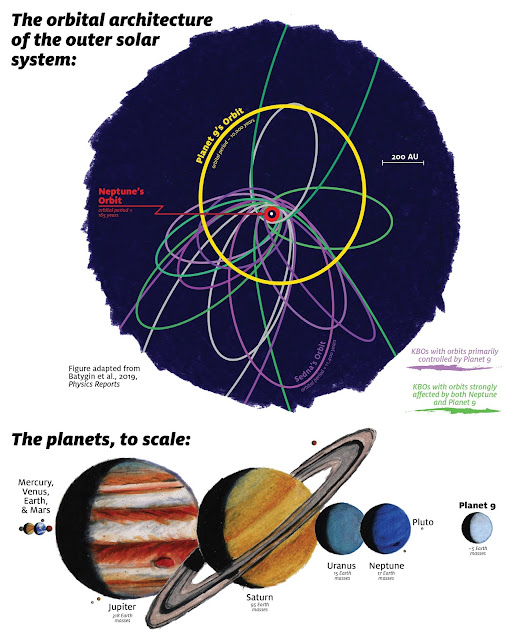 Planet Nine is a factor of ~2 smaller in all quantities compared to what we reported in the original paper. The new estimate of the semi-major axis is a~400-500AU (could potentially be even smaller, but only marginally so). P9’s orbital eccentricity is about e~0.15-0.3. The inclination is around i~20 deg. Last but not least, the mass is about m~5 Earth masses. Planet Nine is probably not a relative of Neptune — it’s a Super-Earth. Now let’s dig into the details a bit.

As always, the best starting point is the observational data. Compared with three years ago, the dataset has expanded by a factor of a couple, and now contains 14 objects with semi-major axis beyond 250 AU and inclinations lower than 40 degrees. The diagram below shows the orbits in physical space, as viewed from the north ecliptic pole, while the inset presents a polar plot of the orbital inclinations and longitudes of ascending node (which dictate the orientations of the orbital planes): 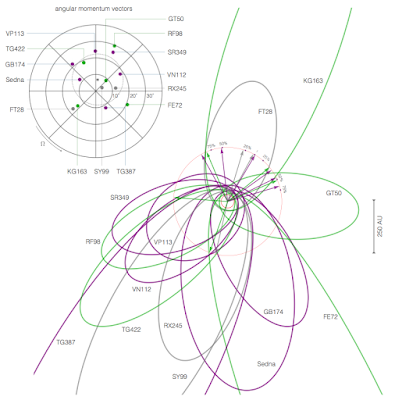 Generally, the distant KBOs span a broad array of perihelion distances, ranging from ~35AU to ~80AU. As a result, some KBOs interact with Neptune (which lives at 30AU) much more strongly than others, yielding a wide spread in dynamical lifetimes. For the purposes of the P9 hypothesis, it is useful to sub-divide the data into three categories: stable, metastable, and unstable orbits, which are shown on the above plot as purple, gray, and green ellipses respectively. Although the orbital confinement among the plotted long-period KBOs is easy to see by eye, it is also evident that the degree of clustering is far more striking among dynamically stable (purple) and metastable (gray) orbits than their unstable (green) counterparts.

Intuitively, the weaker clustering of unstable orbits is easy to understand — KBOs that interact with Neptune most strongly experience relatively rapid dynamical chaos. In turn, these stochastic perturbations erase any innate orbital structure of the distant belt. While all KBOs tell some story within the framework of the Planet Nine hypothesis, some tell a deeper story than others. The most cautious/conservative thing to do then, is to focus exclusively on the (meta)stable objects, which are not contaminated by strong interactions with Neptune. 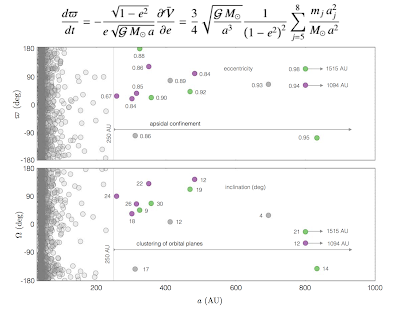 Ok, so these orbits are clustered together — why is that a big deal (i.e., couldn’t they just have formed that way)? In essence, this dynamical structure is puzzling because if left to their own devices, the orbits would disperse on a timescale far shorter than the age of the solar system (due to precession induced upon them by Jupiter, Saturn, Uranus, and Neptune). To give you an example, we can plug in numbers into the above equations, and obtain that while Sedna’s orbit precesses at about 0.15 degrees per million years, 2014 SR349 precesses at 0.8 deg/Myr. Give it a few hundred million years, and the orbits will disband. Therefore, some kind of an external gravitational pull is actively keeping them confined.

As discussed in numerous published papers (see here for a list (papers that cite BBa)), the above orbital anomalies collectively point to the existence of P9. Nevertheless, to date, the parameters of P9 have remained relatively poorly determined. In the new paper, we went to some lengths to remedy this problem. As an example of the type of calculations we carried out, consider one constraint that comes from matching the critical semi-major axis that corresponds to the transition point between randomized and clusters orbital distributions. In other words, if a planet is responsible for the structure that we see, how does it keep all the orbits aligned, and why does this alignment suddenly “turn on” at ~250AU? The simplest way to understand this analytically is to restrict the orbits to a common plane and to examine the functional form of their gravitational coupling. But to do so without resorting to simulations (which is important if we want to understand the dynamics rather than just model them), we have to rely on the so-called orbit-averaging procedure.

Back in the late 1700’s, Joseph-Louis Lagrange and Pierre-Simon Laplace realized that over very long periods of time, gravitational interactions between planets can be approximated by smearing the planets along their respective orbits and computing the gravitational torques that the massive wires exert upon one another. This brilliant insight was better formalized in the mid-1800’s by Gauss, and forms the qualitative basis of secular perturbation theory. Employing this secular approximation, we can write down the total gravitational potential experienced by a KBO, under the influence of the known giant planets as well as Planet Nine, and it looks like this:

Importantly, this expression is the Hamiltonian for the problem at hand, and acts like a stream-function (or a topographic map) for secular evolution of the KBO’s orbit. This means that the long-term changes in the KBO’s orbit will simply follow the contours of the above equation. Neat right? Now, mapping the level curves of this Hamiltonian on a eccentricity vs. longitude of perihelion (relative to P9) plane at different KBO semi-major axes reveals the emergence of a stable equilibrium at ∆w=π for a>250AU. Qualitatively, this is why only distant orbits are clustered — perihelion anti-aligned orbits are only stable beyond a critical semi-major axis, and this value depends on the assumed orbital parameters of P9. 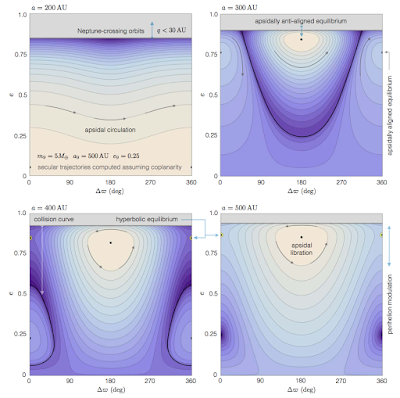 The reason behind why the orbits all cluster to a common orbital plane can also be understood in this manner, but excitation of KBO orbits onto highly inclined/retrograde orbits is considerably more complicated. If you’re interested in learning more, check out section 4 of the manuscript.

Analytical Intuition is important, but a thorough comparison between P9-sculpted synthetic Kuiper belt and real data requires a more detailed description of dynamics. Realistically, such a description can only come from N-body simulations. In this review, we did thousands of them, varying P9's mass and orbital parameters. Typical results from N-body simulations look like the fig below. Notice how in agreement with the above analytical formula, beyond a critical semi-major axis a~250AU, long-term stable KBOs - shown in this plot as blue points - cluster in longitude of perihelion:

In the simulations, the specific choices of P9 parameters directly translate to the characteristics of the distant Kuiper belt sculpted by P9’s gravity. For instance, the critical semi-major axis at which the transition from randomized to clustered orbits ensues, the actual degree of clustering, the mean tilt of the orbits, etc. all depend sensitively on P9 parameters. Although a little abstract, the most transparent approach to visualizing the relationship between simulation and data is in Poincare action-angle variables, and the figure below gives you a taste of the simulations success criteria that we used, as well as a representation of one example simulations 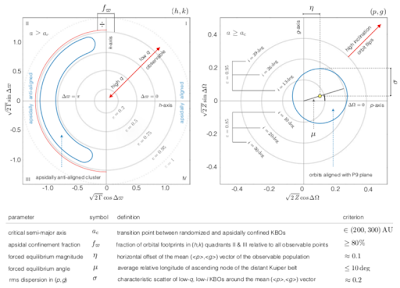 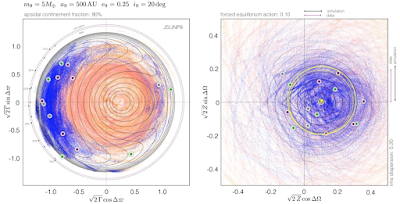 In section 5 of the paper, we carried out a quantitative comparison between statistical properties of the synthetic data and the real objects for each one of our N-body sims. Intriguingly, it was this analysis that revealed that a comparatively low mass Planet Nine fits the data better than our original estimates for P9 in every respect. If you don’t believe me, feel free to examine the full ensemble of 5 Mearth simulations for yourself in the plot below. 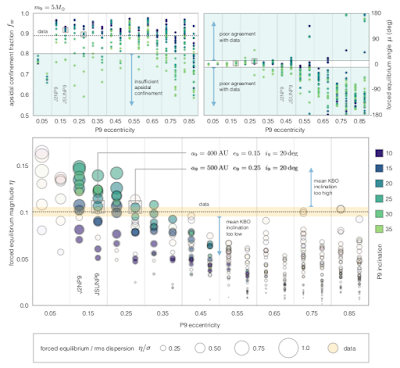 In principle, there is so much more that I would like to say, but at this point I think it’s becoming progressively clearer that my coffee supply ran out a couple paragraphs ago, and in an effort to prevent further degradation of the text, I will get straight to the final point: if Planet Nine is smaller, does that mean it's harder to find with a telescope? Counterintuitively, it's the opposite. The smaller distance from the sun more than makes up for the diminished surface area. Indeed, if we make naive baseline assumptions about P9’s albedo and adopt the interpolated exoplanet mass-radius relation to estimate P9’s size, Planet Nine turns out to be about one magnitude brighter than we previously thought. Annoyingly, though, the aphelion is very close to (in?) the galactic plane, where confusion due to background stars can readily impede detection. Still, unless we are unlucky and P9 is unexpectedly small and/or dark, it should be within the reach of LSST and comparable telescopes like Subaru. The good news is that in the case of Planet Nine hypothesis, time truly will tell. 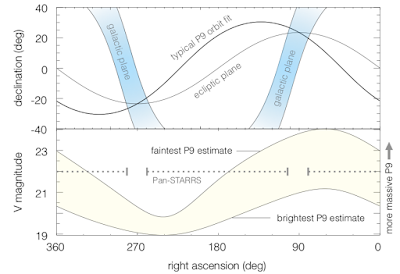