Mean Motion Resonances and the Search for Planet Nine

Greetings! My name is Elizabeth Bailey, and I am a graduate student here at Caltech. As part of my work so far, I have addressed the ongoing search for Planet Nine, in particular the use of mean-motion resonances to infer its present-day location on the sky.
A mean-motion resonance occurs when two bodies orbiting a central body have orbital periods related by an integer ratio. A great example is Pluto and Neptune. Pluto’s orbit is not a perfect circle, but rather a little elongated (e ~ 0.25). It actually crosses Neptune’s orbit, which might lead one to ask if they are on a collision course with each other. Fortunately, the answer is a confident “no.” Neptune and Pluto will never collide, because they are in a 3:2 (pronounced “three-to-two”) mean motion resonance with each other. Meaning, for every three trips Neptune completes around the sun, Pluto completes exactly two. It’s as if they’re dancing with each other. Every three times Neptune steps into the intersection of their orbits, Pluto steps twice somewhere else, and they don’t step on each other.
So what does this have to do with Planet Nine? If Planet Nine exists, the distant KBOs it shepherds may very well experience resonant interactions with it. In fact, this was already pointed out in Konstantin & Mike's original Planet Nine paper, and is at this point relatively well understood. As a result, we can reasonably expect that at least some of the observed KBOs are currently locked into resonances with Planet Nine, and if we can understand the machinery of these interactions, perhaps we can infer the location of P9.
In a sense, the distant solar system is a lot like a giant cosmic nightclub. In this analogy, we are scanning the dance floor for Planet Nine, but it's hanging out in a dark corner somewhere in the back, while everyone is doing a P9-themed dance. So rather than looking for P9 itself, we are instead trying to figure out where it is by studying the KBO mosh-pit. This brings us to the key problem at hand: is this feasible in practice? We address this question in our recent work, published in the Astronomical Journal.
The short answer is no - using resonances does not appear to be a feasible approach to find Planet Nine. Here's a figure from the paper comprised of seven histograms, corresponding to simulations with seven different eccentricities of Planet Nine (e_9 = 0.1, ..., 0.7) showing the count of objects occupying individual resonances. (The 2:1 resonance is located at "2" on the horizontal axis, and the 3:2 resonance is located at "1.5," and so forth.) 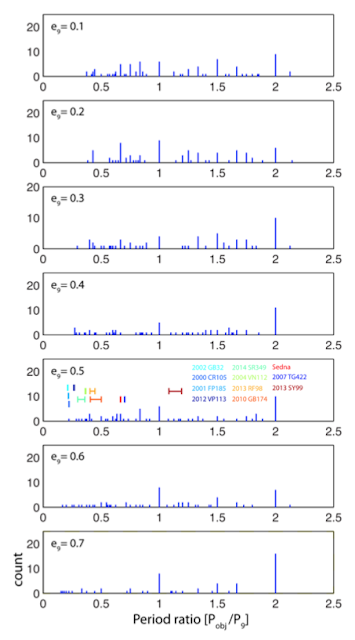 The takeaway point from this figure is that although you do find a lot of KBOs at the big-name resonances like 3:2 or 1:1, there are many objects occupying other resonances with larger integers in their names, like 14:5 or 2:7. There is a disturbing consequence of the mathematical nature of the planetary disturbing function (yes, it is actually called "The Disturbing Function" in celestial mechanics literature) which, upsettingly, suggests that these so-called high-order resonances become increasingly important when dealing with eccentric planets like Planet Nine, and the results of computer simulations presented in this work confirm this. In summary, because Planet Nine is eccentric, it carries out very complicated dance moves with the KBOs.
It's worth mentioning that the simulations used to make this figure were simplified in comparison to reality. The canonical giant planets Jupiter through Neptune were treated as a static ring of mass (this is often referred to as the “secular” approximation), and the solar system is treated as a flat 2-dimensional object even though Planet Nine is, in reality, inclined. Think of it as a best-case scenario of sorts: in this physical setup, Planet Nine is the only active perturber of the KBOs. In the real solar system, Neptune is also on the dance floor, behaving in a very disruptive fashion. When KBOs get too close to Neptune, it flings them around. Sometimes those KBOs resume dancing with Planet Nine, but other times they just head out the door into interstellar space.
Suppose, despite these complications, you could determine which individual KBOs are indeed in mean motion resonances with Planet Nine at this time. Then, if this information were to be of any use, you would then need to know the specific resonance of each KBO. In 3-D simulations, there is no obvious concentration of objects at particular resonances (see figure below). Hence, no matter how long we wait for more KBOs to be observed, we have virtually no hope of using resonances to predict Planet Nine's current location along its orbit. 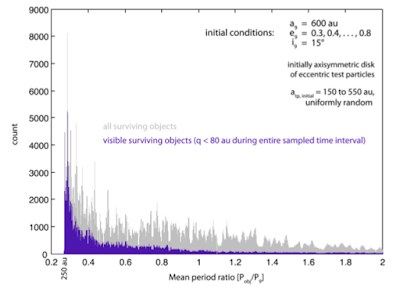 Although based on the results of this work it does not appear feasible to predict the present-day location of Planet Nine along its orbit, this does not by any means imply that Planet Nine is invisible to telescopes. There is still a well-defined swath of sky in which the search for Planet Nine continues. We have merely shown that mean-motion resonances with KBOs are not a useful tool for deciding where point the telescope, so we're back to systematically scanning the sky. Turns out that even in astronomy, the easy way is the hard way.
Posted by Unknown at 3:10 PM