Every die-hard fan of the scientific method knows that Karl Popper was a baller. While his achievements clearly extend far beyond analysis of the scientific method alone, he is arguably best known for his work on empirical falsification. In essence, the idea behind his argument is that a theory is only any good if there exists a direct and clear experimental/observational way to demonstrate that it is incorrect. In other words, it is more important to point out avenues in which your theory can be wrong than to flaunt all the possible ways it could be right.

Why am I writing about this? Mike and I just spent a week at 14,000ft on the Big Island directly searching for Planet Nine, and I’ve been thinking a lot about how Popper’s falsifiability criteria apply to the Planet Nine hypothesis… Obviously, if we search the entire sky at sufficient depth and don’t find Planet Nine, then we are plainly wrong. But I don’t think this is going to happen. Instead, I think we (or some other group) are going to detect Planet Nine on a timescale considerably shorter than a decade - maybe even this year if we/they get lucky. Which begs the question: if a planet beyond Neptune is found, how would we proceed to determine that the Planet Nine theory is actually right? 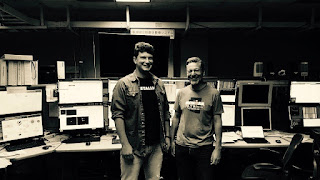 Figure 1. Mike and I at the telescope - where colors don't exist.

I’m sure this question sounds incredibly stupid, so let me back up a bit. The Batygin & Brown 2016 AJ paper is by no means the first to predict a trans-Neptunian planet with a semi-major axis of a few hundred astronomical units. That accolade goes to George Forbes, who in 1880 proposed a planet located at ~300AU, based upon an analysis of the clustering of the aphelion distances of periodic comets (sound familiar?). Since then, a trans-Neptunian planet has been re-proposed over and over again, which brings us to problem at hand: whose trans-Neptunian planet theory is right and whose is wrong?

In my view, there is a very clear and intelligible way to answer this question. Each proposition of a trans-Neptunian planet is uniquely defined by (i) the data it aims to explain and (ii) the dynamical mechanism that sculpts the observations. So in order to be deemed correct, the discovered planet must match both of these specifications of the theorized planet. 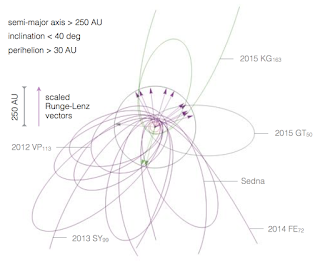 When it comes to the Planet Nine hypothesis, point (i) is well-established: Planet Nine is invoked to explain (1) physical clustering of distant Kuiper belt orbits, (2) the perihelion detachment of long-period KBOs such as Sedna and VP113, as well as (3) the origin of nearly-perpendicular orbits of centaurs in the solar system. Embarrassingly, until recently our understanding of the “machinery” behind how Planet Nine generates these observational signatures has been incomplete. That is, although we have plenty of numerical experiments to demonstrate that Planet Nine can nicely reproduce the observed solar system, the theory that underlies these simulations has remained largely elusive.

The good news is that this is no longer a problem. In a recently accepted paper that I co-authored with Alessandro “Morby” Morbidelli, the theory of Planet Nine is characterized from semi-analytical grounds. So, for the first time, we not only know what Planet Nine does to the distant Kuiper belt, but we understand how it does it.

The first lingering question that Morby and I tackled is that of stability: how do the distant Kuiper belt objects avoid being thrown out of the solar system by close encounters with Planet Nine, when their orbits intersect? Turns out, the answer lies in an orbital clockwork mechanism known as mean motion resonance (MMR). When a Kuiper belt object is locked into an MMR with Planet Nine, it completes an integer number of orbits per (some other) integer number of orbits of Planet Nine. This strict rationality of the orbital periods allows the bodies to exchange orbital energy in a coherent fashion, and ultimately avoid collisions.

But how do such configurations arise in nature? Remarkably, the answer in this case is “by chance.” When the Kuiper belt first formed, a staggering number (roughly 30 Earth masses worth) of small, icy asteroid-like bodies were thrown out into the distant realm of the solar system by Neptune (for the interested reader, see papers about the Nice model here and here). Most of these objects were not fortunate enough to accidentally land into mean motion resonances with Planet Nine and were ejected from the solar system. However, the few that were, survive in the distant Kuiper belt to this day, and comprise the anti-aligned cluster of orbits that we observe. As a demonstration of this point, check out the simulated orbital period distribution of surviving Kuiper belt objects in one of our idealized simulations, and note that all distant bodies have rational orbital periods with that of Planet Nine: 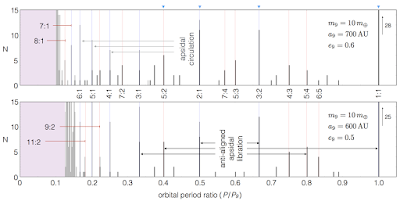 All of this said, the full picture is of course not as clear-cut. Within the context of our most realistic calculations of distant Kuiper belt evolution, the clustered KBOs chaotically hop between resonances, instead of staying put. Still, the qualitative framework provided by analysis of isolated resonances holds well, even in our most computationally expensive simulations.

Ok so this resolves the question of how Kuiper belt objects survive, but it leaves open the question of why their orbits are clustered together. Intriguingly, a qualitatively different dynamical mechanism - known as secular interactions (see here for a neat discussion) - is responsible for the orbital confinement that we see. Plainly speaking, over exceedingly long periods of time (e.g. hundreds of orbits), Planet Nine and the Kuiper belt objects it perturbs will see each-other in almost every possible configuration along their respective orbits. Thus, their long-term evolution behaves as if the mass of Planet Nine has been smeared over its orbital trajectory, and its gravitational field torques the elliptical orbit of the test particle. The plot below shows the eccentricity-longitude of perihelion portrait of this secular dynamic inside the 3:2 mean motion resonance, where the background color scale and contours have been computed analytically and the orange curve represents a trajectory drawn from a numerical simulation. 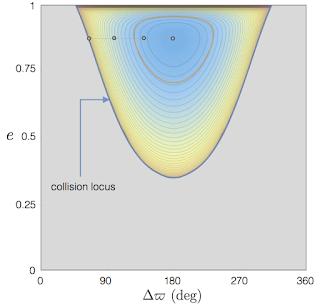 Figure 4. Eccentricity-perihelion diagram showing the secular trajectories of stable KBOs trapped in a 3:2 MMR with P9.

Indeed, the fact that the semi-analytic theory predicts looped trajectories that cluster around a P9 longitude of perihelion offset of 180 degrees implies that the raising of perihelion distances (i.e. lowering of eccentricities) of long-period KBOs and anti-aligned orbital confinement are actually the same dynamical effect. In other words, the reason that objects such as Sedna and VP113 have orbits that are not attached to Neptune is because they are entrained in the peculiar anti-aligned secular dynamic with Planet Nine.

So if it’s not the Kozai-Lidov resonance, then what is it? As it turns out, the high-inclination dynamics induced by Planet Nine is characterized by the bounded oscillation of a octupole-order secular angle which is equal to the difference between the longitude of perihelion of the KBO relative to that of Planet Nine and twice the KBO argument of perihelion. How could we have ever thought it was anything else?… The plot below shows the high-inclination secular resonant trajectories executed by test-particles in our simulation plotted in canonical action-angle coordinates, with the observed objects shown in orange. Examining this plot closely, one detail that I’m reminded of is the fact that the few high-inclination large semi-major axis centaurs that we know of are actually the “freaks” of the overall population, since they all have perihelia on the order of ~10AU. Certainly, detecting a sample of these objects with perihelia well beyond 30AU would be immensely useful to further constraining the parameters of the model. 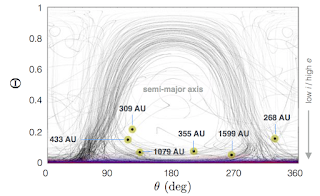 Figure 5. High-inclination dynamics, depicted in action-angle variables.
With the above rambling in mind, I will admit that all I’ve mentioned here is an introductory account of the paper. As such, it represents a considerable simplification of our actual calculations, so if you want to better understand the full picture, I can only urge you to read the paper itself. Importantly, however, the work presented in this manuscript not only provides us with a better understanding of how the observed census of distant KBOs has been sculpted by Planet Nine, it finally places the P9 hypothesis within the framework of Popper’s demand for falsifiability, and sincerely allows for the confrontation of the Planet Nine theory with the observational search. The final step is now to find it.
Posted by Unknown at 7:56 PM