I ended the last post by pointing out that the Planet Nine hypothesis, as currently formulated, entails a theoretical solution to five seemingly-unrelated observational puzzles: (i) orbital clustering of a>250AU KBOs, (ii) dynamical detachment of KBO perihelia from Neptune, (iii) generation of perpendicular large-semi-major axis centaurs, (iv) the six-degree obliquity of the sun, and (v) pollution of the more proximate Kuiper belt by retrograde orbits. Virtually all of the discussion surrounding the new OSSOS dataset to date has focused on long-period orbits and the statistical significance of perihelion clustering beyond ~250AU - a concern relevant exclusively to point (i). Breaking with this trend, in this post I want to examine a shorter-period component of the new data, and discuss how it relates to arguably the most unexpected consequence of P9-driven evolution: generation of retrograde orbits with semi-major axes smaller than ~100AU (i.e. aforementioned point (v)).

Those of you who have been following the P9 saga for more than a year might remember the article by Chen et al. from last August, which reported the detection of Niku, a ‘rebellious’ Kuiper belt object that orbits the sun in the retrograde direction (see news coverage here and here). While the orbit of Niku itself is in some sense unremarkable (because it is acutely similar to the orbit of Drac - another retrograde object that was detected back in 2008), this discovery did successfully reinvigorate the community’s interest in the high-inclination population of the trans-Neptunian region.

Here is a look at all objects within the current dataset with inclinations greater than 60 degrees, semi-major axes in the range of 30AU to 100AU, and perihelion distance in excess of Jupiter’s orbit: 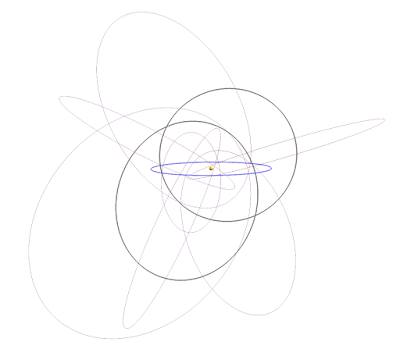 For scale, Neptune’s orbit is shown here as a blue circle, and the orbits of Niku and Drac are emphasized in gray. Generally speaking, these bodies trace out an apparently-random orbital structure and raise an important question regarding the physics of their origins, since none of them can be reproduced by conventional simulations of the solar system’s early evolution.

Unlike objects such as Sedna and 2012 VP113, Niku and Drac are currently quite close to Neptune itself, and have semi-major axes that are much too small to interact with Planet Nine directly. Nevertheless, in a paper published last October, we showed that Planet Nine naturally leads to their production. The crux of our result is that the current orbits of these bodies are very different from their primordial ones. Specifically, in our simulations we noticed that Kozai-Lidov type oscillations experienced by distant Kuiper belt objects due to Planet Nine can drive them onto highly inclined, Neptune crossing orbits. Subsequently, close encounters with Neptune shrink the orbit, freezing it onto a retrograde state. Mark Subbarao from Adler Planetarium has kindly created this visualization of one of our simulated particles, that ends up on an orbit that is almost an exact replica of Niku and Drag (grab the video here if the player below does not work):


Despite a rather complicated and genuinely chaotic evolution, our P9-facilitated generation mechanism of these objects predicts a rather specific orbital distribution in (semi major axis a) - (inclination i) - (perihelion distance q) space. This prediction is shown below as a background green/gray grid, with observed data over-plotted as purple/black points.

In addition to the observed objects that were already known back in October of last year, this plot shows two new data points that also fit the simulated pattern beautifully. Thus, the predictions of the Planet Nine hypothesis have held up very well within the more proximate part of the trans-Neptunian region, where the planet’s direct influence is minimal.

So where does the new data leave us? Let’s summarize: while the membership of the primary perihelion cluster has gone from six to ten, the distant belt now also has some objects that do not belong to the apsidally anti-aligned population of long-period KBOs. Despite worries of Planet Nine’s immediate demise, it is pretty clear that these bodies fit well with other dynamical classes predicted by the model, so there’s no real conflict there. Closer to Neptune, we’ve picked up a couple high-inclination objects that also agree well with the model. Sigh…

Cumulatively, I can’t help but feel an uneasy combination of relief and disappointment. On one hand, the agreement between simulations and data implies that the theoretical model remains on solid footing. As we head into upcoming P9 observing season, this is important and reassuring. On the other hand, we haven’t learned anything genuinely new from the expanded dataset, and P9’s precise location on its orbit as well as a well-founded qualitative description of P9-induced dynamics remain somewhat elusive. Clearly, much work - both theoretical and observational - remains to be done. So back to research.
Posted by Unknown at 10:39 AM