It has been an exciting and turbulent couple of weeks in Planet Nine land. The OSSOS survey has released their full data set, which in addition to over 800 garden-variety Kuiper belt objects, contains four little worlds with semi-major axes beyond 250AU. Together with the previously published data, this brings the count of distant bodies relevant to the P9 hypothesis up to 13 - a whopping 117% increase in the census of long-period KBOs, compared with what we had back in early 2016.

When viewed from above, the orbits of the objects look like this: 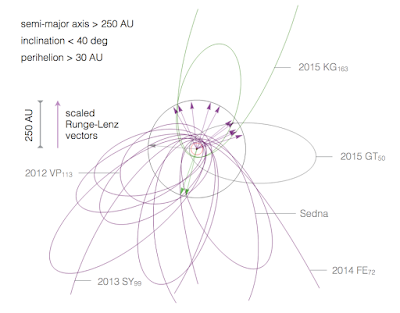 So what story does the newly updated data foretell? Let’s look at the dry facts first. The membership of the primary orbital cluster that we pointed out in the first paper (shown in purple) has grown to ten. Meanwhile, two of the objects (shown in green) have orbits that are diametrically opposed to the primary cluster. Finally, there is also a single outlier, 2015 GT50, shown in gray. Cumulatively, this is a somewhat more complex picture than what we had a couple years ago.

If you look at the OSSOS data in isolation, it contains two objects that are in the purple camp, one green orbit, and the gray outlier. You need to know exactly zero statistics to conclude that these four points DO NOT form a pattern. And this is what the OSSOS team concludes as well, after carrying out a sophisticated account for the observational biases inherent to their survey. Indeed, from the independent OSSOS dataset alone, a random underlying distribution (as opposed to a clustered distribution) cannot be ruled out.

When you look at the full dataset, however, the propensity for orbital clustering is clear. Shankman et al. argue that this clustering is unlikely to be real, and is merely apparent. That is, in their view, observational biases conspire to make certain parts of the night sky more observable than others, leading to the discovery of orbits that share a common orientation more frequent. In striking contrast, a recent paper that Mike put together shows exactly the opposite to be true for the non-OSSOS dataset: observational bias cannot account for orbital clustering beyond 250AU.

Perhaps the resolution lies in that observational surveys that discovered non-OSSOS objects share very little in their design with OSSOS, leading to staggeringly different biases between the OSSOS and non-OSSOS datasets. But one way or another, the likely take away message here is that although the data shows a statistically significant tendency for clustering, the emergent story is not as simple as that of all orbits with periods longer than ~4000 years (or equivalently, semi-major axes greater than 250AU) sharing a common orientation. Rather, the primary orbital cluster is accompanied by a diametrically opposed population of orbits, and is contaminated by an outlier.

Let’s now compare this picture with theory. Numerical simulations of solar system dynamics that include P9 (e.g. BB16a BB16b) predict that beyond semi-major axis of 250AU, there will be a strong, long-term stable cluster of bodies with orbits that are anti-aligned with respect to the major axis of P9 as well as a weaker, metastable cluster of objects that are aligned with the orbit of P9. From an evolutionary point of view, objects belonging to the anti-aligned cluster are those that were scattered into distant orbits billions of years ago and were locked into an immutable, resonant pattern of anti-aligned perihelion libration. On the other hand, aligned orbits are those that were scattered out by Neptune (from a lower semi-major axis region) comparatively recently (e.g., ~ hundreds of millions of years ago), and due to mean-field interactions with Planet Nine will be ejected from the solar system as soon as their orbits precess out of alignment with that of P9.

Within the context of this theoretical expectation, the purple and green orbits depicted in the above picture are readily interpreted as members of the anti-aligned and aligned clusters respectively. To this end, here is a plot of orbital orientation (longitude of perihelion relative to the major axis of Planet Nine) vs. particle semi-major axis where the data are color-coded in the same way as in the above graphic, while blue and orange points show dynamical footprints of the long-term stable and metastable simulated particles respectively: 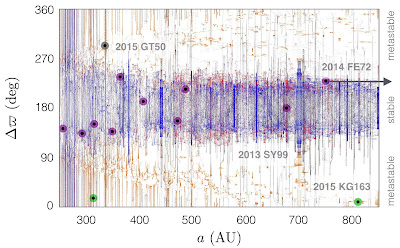 If we adopt this interpretation, the purple data points are drawn from the distribution of simulated objects shown in blue, while the green points belong to the orange population of test-particles. Although this explanation is comforting, we pretty much knew this already. So there is nothing particularly surprising here.

The data point I got considerably more intrigued by is the outlier, 2015 GT50. As already mentioned previously, this object does not belong to either the aligned or anti-aligned cluster, so naively speaking it simply doesn't fit the model. A more cursory inspection of the above plot however, brings to light the existence of a string of specific orbital radii that correspond to resonances with Planet Nine, where the simulated objects circulate through the full 0-360 degree range of orbital orientations. Remarkably, the outlier (2015 GT50) falls *exactly* on one such orbit (i.e. note on the plot above that the gray point falls on a vertical blue line).

This is kind of staggering. Without changing the Planet Nine parameters at all (to make this plot I’ve adopted the same a=700AU e=0.6 m=10Mearth P9 configuration as in the original Batygin & Brown 2016 AJ paper), the model manages to fit all the data, including the supposed outlier. Of course, the fact that the observed object fits so well with theory might be a coincidence, but this correspondence nevertheless emphasizes that the mere existence of a small number of apsidally unconfined objects that do follow the overall pattern exhibited by the data, does not constitute strong evidence against the Planet Nine hypothesis. Instead, mapping out this comparatively uncommon population of unconfined objects might lend important constraints on P9’s semi-major axis.

There is one other crucial aspect here, which is that the clustering of a>250AU orbits constitutes only one line of evidence for Planet Nine. If that were the entire story, the P9 hypothesis would have never made it to publication, because we would not have submitted the paper. Instead, what makes the theoretical case for Planet Nine compelling is its capacity to simultaneously explain (i) orbital clustering, (ii) dynamical detachment of KBO perihelia from Neptune, (iii) generation of perpendicular large-semi-major axis centaurs, (iv) the six-degree obliquity of the sun, as well as (v) pollution of the more proximate Kuiper belt by retrograde orbits. In my view, it is only when these pieces of the puzzle are put together that Occam’s razor begins to cut in Planet Nine’s favor. But in the end, time will tell - unlike many theoretical questions, the existence of Planet Nine has a well-defined observational resolution, and we’ll know the answer in less than a decade.
Posted by Unknown at 6:28 PM 78 comments: