Where is Planet Nine?

At the time we published our paper on Planet Nine, we were working on a companion paper, that we had hoped to finish that same day, that would tell you where to look for Planet Nine. Finally, only two months later than anticipated, we have finally finished the paper.

I'll be writing in more depth about where we think Planet Nine is, how we constrain it, and how we're going about trying to find it, but, first, I want to simply put in a link to the paper, so you can go read it yourself:

Abstract: We use an extensive suite of numerical simulations to constrain the mass and orbit of Planet Nine, the recently proposed perturber in a distant eccentric orbit in the outer solar system. We  compare our simulations to the observed population of aligned eccentric high semimajor axis Kuiper belt objects and determine which simulation parameters are statistically compatible with the observations. We find that only a narrow range of orbital elements can reproduce the observations. In particular, the combination of semimajor axis, eccentricity, and mass of Planet Nine strongly dictates the semimajor axis range of the orbital confinement of the distant eccentric Kuiper belt objects. Allowed orbits, which confine Kuiper belt objects with semimajor axis beyond 230 AU, have perihelia roughly between 200 and 350 AU, semimajor axes between 300 and 900 AU, and masses of approximately 10 Earth masses. Orbitally confined objects also generally have orbital planes similar to that of the planet, suggesting that the planet is inclined approximately 30 degrees to the ecliptic. We compare the allowed orbital positions and estimated brightness of Planet Nine to previous and ongoing surveys which would be sensitive to the planet's detection and use these surveys to rule out approximately two-thirds of the planet's orbit. Planet Nine is likely near aphelion with an approximate brightness of 22<V<25.  At opposition, its motion, mainly due to parallax, can easily be detected within 24 hours.


The key figure is at the very end, as it answers WHERE SHOULD I BE LOOKING FOR PLANET NINE???? Here is that figure in a much larger form so you can see it better: 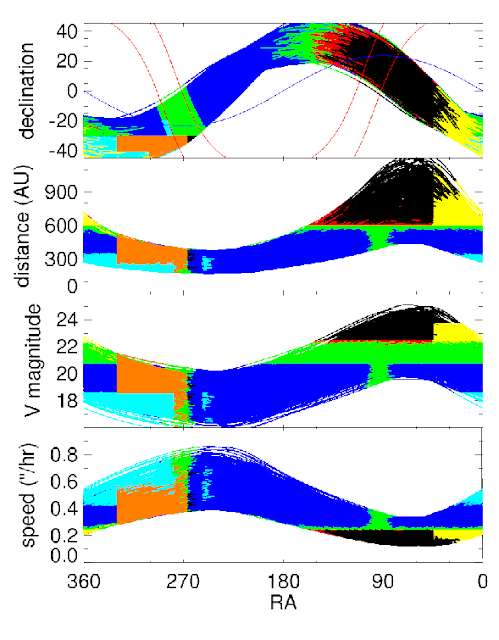 You can read the paper for details on what the colors all mean, but the quick version of the story is this: in the black regions no current or ongoing survey can detect Planet Nine through its full predicted range. Amazingly, the black region is pretty small! Each color represents a survey that should have or will detect Planet Nine if it is in that position in the sky. Light blue is earlier work of mine from a large all sky survey, dark blue is ongoing work I am doing using Pan-STARRS transient data, green is the Pan-STARRS moving object key project (with an extension, in red), yellow is the Dark Energy Survey. My favorite constraint is orange, which shows where the lack of perturbations to the position of Saturn as measured by the Cassini spacecraft rules out Planet Nine.