A Stranger at Home

An interesting consequence of being asked the same question repeatedly, is that you stop thinking about the answer. Instead, you find yourself reciting a variant of the same prefabricated response that you gave the previous twelve times. Naturally, in this mode of operation, your brain is susceptible to being stumped by otherwise trivial inquiries, simply because you haven’t heard them before and they don’t automatically register in the existing database. Recently, I found myself in exactly this situation.

A recurrent question about which Mike and I have thought extensively is “what if you’re wrong?” For an extended discussion about this possibility, scroll down to the previous post. But the perplexing question, posed to me by a reporter some time ago, was a different one: “what if you are right?” In all honesty, my first reaction was “huh? What does this even really mean?” Of course, we hope that we are right! We hope that the dynamical mechanism connecting the alignment of the distant Kuiper belt orbits, the detachment of Sedna-type ellipses from Neptune and the mysteriously inclined trajectories of large semi-major axis Centaurs, is a chaotic web of mean-motion resonances facilitated by Planet Nine. Moreover, we hope that Planet Nine will be observationally detected, like, as soon as possible, ya know what I’m sayin’?…

But on second thought, it is evident that I was being dopey. This question has considerable depth. If we are right, the clockwork of our solar system is about to acquire a very aberrant new gear, and this has profound implications for how our strange cosmic home fits into its extrasolar context. More specifically, the detection of Planet Nine would render our solar system a slightly less abnormal member of the Galactic planetary census.

In order to understand just how unusual the architecture of the known solar system is, it is useful to dial the clock back to late November of 1995 - that is, to the discovery of the first planet around another sun-like star. With a mass slightly larger than that of Saturn, this object (dubbed 51 Peg b) is bonafide giant planet. However, unlike Jupiter and Saturn, that require more than a decade to finish a single revolution around the sun, 51 Peg b completes its orbital trek in a little over four days. Indeed, the first proof that planets around other main-sequence stars are extant also provided the first hint that orbital architectures of extrasolar planets can be very different from that of solar system’s planets.

Observational characterization of more expansive giant planet orbits during the subsequent decade and a half continued to yield surprises. Evidently, long-period giant planets tend to occupy eccentric, rather than circular, orbits. The figure below shows the semi-major axis - eccentricity distribution of well-characterized extrasolar planets. While the solar system giants would be found scraping the bottom of this figure, exoplanets clearly occupy the the entire eccentricity range, with a nearly parabolic orbit of HD 20782 b at the helm of the population. 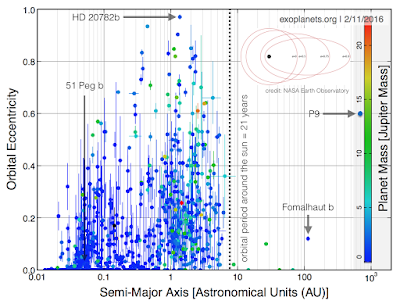 More recently, the triumphant success of the Kepler mission showed that the default mode of planet formation in the galaxy generates objects that are somewhat smaller than Uranus and Neptune, but are substantially more massive than the Earth. In other words, planetary masses of order ~10 Earth masses are not only prevalent in the exoplanet catalog, they are dominant. Although the transit technique limits the observational window of Kepler to orbits inside ~1AU, there is little reason to suggest that more distant orbits should be devoid of such planets. 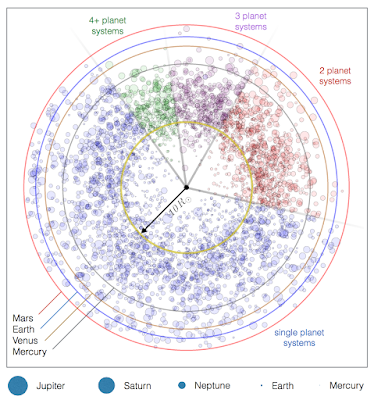 Figure 2: the catalog of planetary candidates detected by Kepler. The sizes of the depicted points are representative of the corresponding planetary radii. The semi-major axes are shown on a logarithmic scale. Figure from Batygin & Laughlin 2015.

Cumulatively, a distinct picture of the Galactic planetary census is beginning emerge, wherein the ordered orbits of the known planets of the solar system are starting to appear increasingly abnormal. On the other hand, with a characteristic mass approximately 10 times greater than the Earth and an eccentricity of ~0.6, Planet Nine fits into this extrasolar planetary album seamlessly. Intriguingly, this yet-unseen world may provide the closest link between our solar system, and the extrasolar realm. Indeed, Planet Nine may constitute the closest thing to the solar system’s very own extrasolar planet.