There is an uneasy exhilaration in announcing that the solar system might contain a dim, massive, and as-yet unseen planet.

Certainly, nearly every attempt to predict the existence of a “Planet X” has ended in failure, but history does contain one shining success. LeVerrier and Adams’ theoretical predictions of the existence of Neptune, based on observed irregularities in Uranus’ orbit, are hailed as one of the all-time success stories of astronomy. And as history shows, the issues with post-1846 claims of Planet X have had more to do with erroneous interpretation of the observational data, than anything else. In other words, every time the observations seemed to call for an introduction of a putative additional planet, further analysis has revealed that the apparent anomalies could be fully reconciled within the framework of the known solar system.

Remarkably, the solar system in 2016 tells a very different story. Beginning with the 2003 detection of Sedna (a discovery I remember learning about from a guy cautiously trying to hide his lit cigarette in his backpack during high school lunch break), it has been clear that the solar system still has some tricks up its sleeve. Unlike the rest of the Kuiper belt, Sedna traces out an orbit whose origin cannot be explained by perturbations from the known giant planets alone. And while Sedna’s isolated orbit could in principle be attributed to a dynamical perturbation that occurred during the solar system’s infancy, the 2014 paper by Trujillo and Sheppard demonstrated that there is in fact, much more to the story. It was with this very paper in hand, and a facial expression showing a combination of excitement and concern, that Mike Brown walked into my office a year and a half ago.

Prompted by their discovery of 2012 VP113, a second object residing on a Sedna-type orbit, Trujillo and Sheppard pointed out that all Kuiper belt objects with orbits that do not veer into inter-planetary space and spend longer than approximately 2000 years to complete a single revolution around the Sun, tend to cluster in the argument of perihelion. As it turns out, this clustering represents only a part of the full picture. A closer look at the data shows that six objects that occupy the most expansive orbits in the Kuiper belt (including Sedna and 2012 VP113) trace out elliptical paths that point into approximately the same direction in physical space, and lie in approximately the same plane. 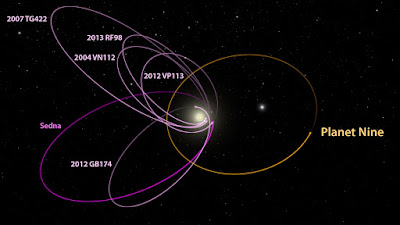 Mike and I were genuinely perplexed. Could the confinement of the orbits be due to an observational bias or a mere coincidence (after all, we are talking about six objects here - not exactly “big data”)? Thankfully, the probability of the observed alignment being fortuitous can be assessed in a statistically rigorous manner, and clocks in at right around 0.007%. Not a great gamble. Moreover, application of simple perturbation theory (or direct numerical integration) demonstrates that if allowed to evolve under the gravitational influence of Jupiter, Saturn, Uranus and Neptune, the orbits would become randomly oriented on timescales much shorter than than the multi-billion year lifetime of the solar system. So the dynamical origin of the peculiar structure of the Kuiper belt cannot be outsourced to the distant past - something is holding the orbits together right now.

Our progress was initially anything but rapid. Coming from observational and theoretical backgrounds respectively, Mike and I don’t always speak the same language, and would spend hours arguing profusely, only to later realize that we are in fact, saying the exact same thing. Then there were all the ideas that did not pan out. Ideas crowding out our outtakes reel range from models where the self-gravity of the Kuiper belt itself keeps the observed structure intact (see a recent paper by Madigan & McCourt on this topic) to a scenario where the orbit of a distant planet cradles the orbits of Kuiper belt objects from the outside, maintaining the same average orientation. Each hypothesis failed when confronted with the data.

Last summer brought our first glimpse of hope. Through a series of numerical experiments (wherein an initially axisymmetric disk of planetesimals occupying eccentric, Neptune-hugging orbits, was allowed to evolve under the gravitational influence of a distant perturber) we began to note that planetesimal swarms could be sculpted into collinear groups of spatially confined orbits by “Planet Nine". Intriguingly, this would only occur if Planet Nine was chosen to be substantially more massive than the Earth, and to reside on a highly eccentric orbit. More unexpectedly, the confined orbits would cluster in a configuration where the long axes of their obits are anti-aligned with respect to Planet Nine, signaling that the dynamical mechanism at play is resonant in nature.

Surprising and unforeseen results suddenly began to accrue. Upon a cursory examination of the simulation data, we noticed that gravitational torques exerted onto the Kuiper belt by Planet Nine would induce long-period oscillations in the perihelion distances of the confined KBOs. This naturally generated detached orbits, such as those of Sedna and 2012 VP113. Moreover, the evolutionary calculations suggested that if we were to revisit the Kuiper belt in a hundred million years, objects like Sedna and VP would look like conventional garden variety KBOs, while some of the more typical objects would acquire detached orbits. 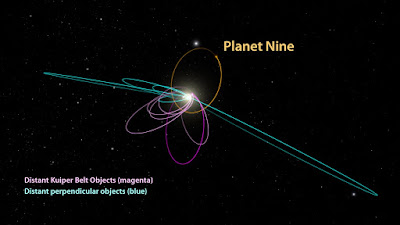 And finally, there was a weird, crazy twist. Even in simulations where Planet Nine was chosen to reside in approximately the same plane as the rest of the solar system, the model consistently generated orbits that are nearly perpendicular with respect to the nominal plane of the Kuiper belt. Imagine our surprise when we realized that such a population of objects actually exists! (See also this paper by Gomes et al) Ultimately, some additional effort is needed to understand the process by which KBOs acquire perpendicular orbits, but our bets are placed onto the Kozai effect inside mean-motion resonances.

In the end, our model ties together three elusive aspects of the Kuiper belt (namely, physical alignment of the distant orbits, generation of detached objects such as Sedna and the existence of a population tracing our perpendicular orbital trajectories) into a single, unifying picture. As a dynamical model, this appears compelling. But it is simultaneously important to keep in mind that until Planet Nine is caught on camera, it remains a theoretical prediction. In the mean time, however, we hope that our calculations trigger an observational hunt for Planet Nine, and we will one day wake up to learn that solar photons that have reflected off of planet nine’s frigid surface, have landed onto the aperture of a terrestrial telescope.
Posted by Unknown at 5:55 PM