Is Planet Nine a "planet"?

In 2006, when the International Astronomical Union codified what we mean when we say the word "planet," I was quoted multiple times saying something like, "That's it. That's the end of planets. We get eight in this solar system and that will have to be enough. Since 1845 there have been no new ones to discover."

But is it a planet? The IAU definition of planet includes the clunky phrase that it has to "clear its orbit." Really, this phrase is just an attempt to explain the concept that planets are the gravitational dominant things of planetary system and that one of the ways they display their gravitational dominance is by pushing around everything in their path. Overly literal critics of the IAU definition will insist that because Jupiter has asteroids which co-orbit with it (the Jupiter Trojans) that Jupiter is not a plane by this definition, etc. etc., but that is simply a problem with the clunkiness of the statement of the definition, not of the underlying concept.

If that is not good enough for you, though, astronomer Jean-Luc Margot at UCLA has recently written a nice paper finally quantifying what the phrase "clear its orbit" really means. To clear an orbit, an object has to be a certain size, given its distance. I've taken the key figure from his paper, which shows the planets of the solar system and compares them to the "planet" criterion (note that all of the planets are well above the planet line, while the 3 dwarf planets are well below it; this wide separation between planets and dwarf planets is another indicator of how solid the concept of gravitational dominance in the solar system is). If we extend this figure out to the distance and mass of Planet Nine, we find that it, too, is above the planet line for all of our considered cases. 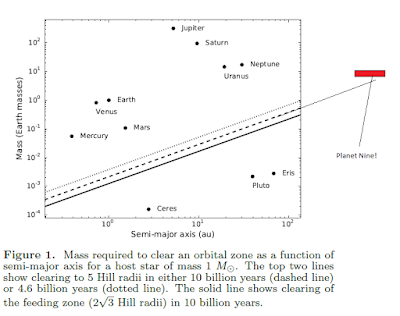 (technical note: Margot has several different criteria for clearing; we prefer the "clear the feeding zone in 4.5 billion years" criterion, which is the line that we have extended).

For for much of the predicted range and size of Planet Nine it is comfortably above the line, at its most distant possible orbit and its smallest possible mass, Planet Nine just barely scrapes by as a planet by this calculation. However, we believe that if it really is on the most distant of possible orbits it is probably on the more massive side. Why? Because if it is going to have the effects that we have seen, it needs to be even more massive if it is further away. In short: no matter where it is, the one thing we know for sure about Planet Nine is that it is dominating the outer edge of the solar system. That is enough to make it a planet by anyone's calculation.
Posted by Mike Brown at 11:23 AM